Journalist Meera Subramanian, the 2019-20 Currie C. and Thomas A. Barron Visiting Professor in the Environment and the Humanities in the Princeton Environmental Institute (PEI), comes to Princeton as part of her exploration of what motivates people’s relationships with and attitudes toward the environment. 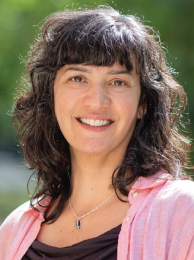 Subramanian, who has published her work in national and international outlets, focuses her writing on the intersection of culture and environment. Her acclaimed 2015 book, “A River Runs Again: India’s Natural World in Crisis, from the Barren Cliffs of Rajasthan to the Farmlands of Karnataka,” explored the stories of Indians from multiple strata of society as they overcame the country’s various environmental crises, including extinction, pollution, and food and water shortages.

“Since my work in India, I’ve turned to the domestic issue of climate change and politics in the United States, fascinated by the way that the science alone has failed to get people engaged and trying to better understand the drivers behind the debate,” Subramanian said.

That fascination is the root of the fall environmental studies course Subramanian is teaching, “Crossing the Climate Change Divide.” Students in the seminar are exploring how Americans nationwide are personally experiencing climate change, and how their perception of it is shaped by political, economic and religious beliefs independent of scientific consensus or sensible environmental policy.

The course stems directly from the nine-part series “Finding Middle Ground” that Subramanian wrote for InsideClimate News, for which she spent 18 months between 2017 and 2018 traveling and reporting from across the United States.

“I wove together science and storytelling to convey the complexity about how people are thinking — or not thinking — about climate change in this increasingly polarized political time,” Subramanian said. “I was staggered by the parallels between what I had unearthed in India and what I discovered in America’s heartland — ideas about loss and nostalgia infuse how people connect to their home grounds.”

Subramanian is encouraging her students at Princeton to experience the miscellany of perspectives and motivations she encountered, rather than see climate change as an issue of one side against the other. New to the area, Subramanian is working with Princeton-based Climate Central and colleagues who have been connecting students to local agriculture or taken them to Pennsylvania for climate town halls At the same time, Subramanian is taking in the point of view of her students, the generation tasked with mitigating — and adapting to — the first worst effects of climate change.

“I am learning from my students in our class discussions, getting a window into their minds and learning what about this issue will be most urgent for them with their long lives ahead of them,” Subramanian said.

“I didn’t realize it, but I had been approaching my reporting and research with an environmental humanities lens, such as how clean biomass cookstoves were not just a tech issue, but also a gender, energy, health and climate issue,” Subramanian said. “It was great to come to Princeton and learn that PEI was the hub of an entire community of people thinking about these issues from all different angles and, most importantly, talking to each other and learning from each other.”

Established with support from Currie C. and Thomas A. Barron ’74, the Barron Visiting Professor program has hosted 14 accomplished humanists since 2007 with the intention of forging closer ties between the environmental sciences and the humanities and social sciences at Princeton. Visiting professors have explored issues such as environmental justice, eco-literature, environment and comedy, religion and ecology, and the imagery of climate change in art and architecture. They have added courses to PEI’s curriculum, advised students, presented public lectures, organized conferences and exhibitions, and created interdisciplinary approaches to the study of environmental topics.

A directory of past Barron Visiting Professors is available on PEI’s website.