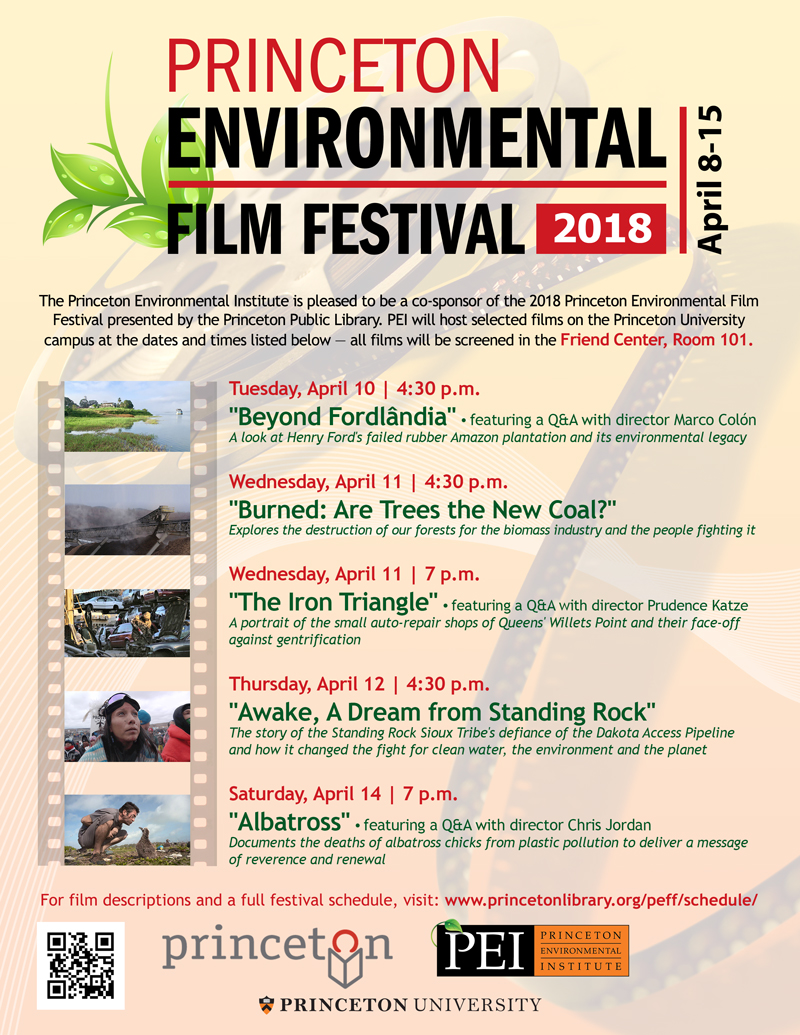 “Beyond Fordlândia“
Featuring a Q&A with director Marco Colón
Tuesday, April 10 | 4:30 p.m.
The film begins in 1927 when the Ford Motor Company attempted to establish rubber plantations on the Tapajós River, a primary tributary of the Amazon. This film addresses the recent transition from failed rubber to successful soybean cultivation for export, and its implication for land usage. The film explores questions such as the ecological implications of this venture 90 years later, how Fordlândia foreshadows today’s destruction of the rainforest, and the lessons to be learned from ecological experimentation and the Fordlândia experience in particular.

“Burned: Are Trees the New Coal?”
Wednesday, April 11 | 4:30 p.m.
This film tells the little-known story of the accelerating destruction of our forests for fuel and probes the policy loopholes, huge subsidies and blatant greenwashing of the burgeoning biomass power industry. The film follows a dedicated group of forest activists, ecologists, carbon scientists and concerned citizens who are fighting to establish the enormous value of our forests, protect their communities, debunk this false solution to climate change, and alter energy policy both in the U.S. and abroad.

“The Iron Triangle“
Featuring a Q&A with director Prudence Katze
Wednesday, April 11 | 7 p.m.
For decades, Queens’ Willets Point, known as the Iron Triangle, has been the site of an interconnected network of hundreds of small auto-repair shops known for no-frills but inexpensive, quality service. The owners, many of them immigrants, have persevered despite a lack of city support, but their luck may have just run out. With the Iron Triangle declared a blight and marked for lucrative redevelopment, the working class of Willets Point faces off against gentrification and urban renewal for the future of their livelihoods and community.

“Awake, A Dream from Standing Rock”
Thursday, April 12 | 4:30 p.m.
The Dakota Access Pipeline is a controversial project that brings fracked crude oil from the Bakken Shale in North Dakota through South Dakota, Iowa and, eventually, to Illinois. The Standing Rock Sioux Tribe and people all over the world oppose the project because the pipeline runs under the Missouri river, a source of drinking water for more than 18 million people and pipeline leaks are commonplace. “Awake, A Dream from Standing Rock” moves from summer 2016 when demonstrations over the pipeline’s demolishing of sacred Native burial grounds began, to the current and disheartening pipeline status. It is a powerful three-part visual poem that uncovers complex hidden truths with simplicity. The Water Protectors at Standing Rock captured the world’s attention through their peaceful resistance. The film documents the story of Native-led defiance that has forever changed the fight for clean water, our environment and the future of our planet.

“Albatross”
Featuring a Q&A with director Chris Jordan
Saturday, April 14 | 7 p.m.
On a remote atoll in the North Pacific Ocean, albatross chicks are dying, their bodies filled with plastic. “Albatross” unflinchingly shows the horror and grief of this tragedy, but ultimately brings us to a deeply felt experience of beauty and love for life on Earth. Stepping outside of traditional documentary-film style, “Albatross” delivers a profound message of reverence and renewal.