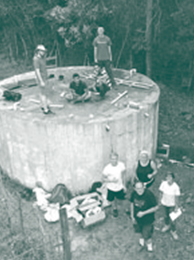 Princeton’s Engineers Without Borders Chapter in the Dominican Republic partnered with El Cajuil, a rural community of roughly 130 households, to improve their water supply. An assessment trip in summer 2016 determined that distribution inefficiencies were a major problem leading to inconsistent water delivery. In summer 2017, PEI interns returned to El Cajuil to improve the supply of water. A float-valve assembly was installed at the inlet to the primary storage tank to prevent water from overflowing during periods of plentiful water and allow it to collect in the reservoir instead. Water meters were installed to provide the team and the community with a more comprehensive idea of water usage. These readings helped us identify an unknown connection between our community’s water system and the system of a neighboring town. By separating them, we prevented valuable water from bypassing the houses in El Cajuil. Finally, the foundations of a disinfection system were put in. These implementations will improve the quality of the water that community members receive and set the foundation for future projects to ensure water scarcity will no longer be an issue.