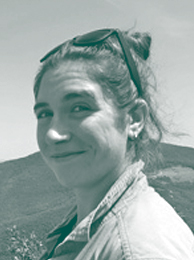 History of Earth Climate in the Sedimentary Rock Record

I worked primarily in Zumaia and Sopelana, Spain, studying the climate change record captured in periplatformal carbonates from the Paleogene Period. We measured layer types and thickness, and collected rock samples from each stratigraphic section. I prepared these rock samples for carbon- and oxygen-isotope measurements in the Maloof Lab by reducing the rocks to powder with a saw and dental drill, or with mortar and pestle. I dissolved the samples in acid and measured the carbon dioxide gas on an isotope-ratio mass spectrometer. With these data, we can see how environmental changes at the Cretaceous-Paleogene boundary may have influenced — or been influenced by — the demise of the dinosaurs and the rise of mammals. I also searched for periodicity in the layer thickness and isotope data to test the hypothesis that slight changes in Earth’s orbit paced the climate change that influenced carbonate deposition. I received intensive field training from two faculty members and two Ph.D. candidates. They taught me how to conduct geological work and gave me insight into graduate school life and academic research. I learned how to run different lab equipment and reduce data. Although my actual interest is environmental engineering, this experience enriched my understanding of paleoclimate science.