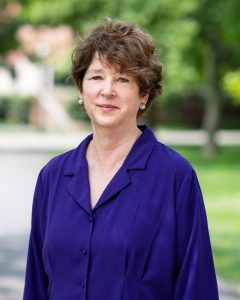 Joan Ruderman is Senior Biologist and Lecturer at the Princeton Environmental Institute. She previously served as the Marion V. Nelson Professor of Cell Biology at Harvard Medical School in Boston and as the President & Director of the Marine Biological Laboratory in Woods Hole. Trained as a developmental biologist, most of her research has focused on the molecular mechanisms that regulate cell division and early development. More recently, she has turned her attention to the public health and wildlife effects of environmental contaminants that mimic or interfere with estrogen, testosterone and other hormones. These include chemicals used to make many of the plastics in consumer products encountered in everyday life (such as BPA, phthalates and PFAS “forever” chemicals, as well as pesticides, flameretardants, chemicals used for fracking in shale gas production.

As Senior Science Advisor at the Radcliffe Institute for Advanced Study at Harvard, she helped to establish a program that covers the crosscutting roles of water in areas that range from human health to geopolitical disputes. Among her national leadership roles, she has served on the Medical Advisory Board of the Howard Hughes Medical Institute and the Scientific Advisory Board of the Ellison Medical Foundation. Following her arrival at Princeton, she created a new undergraduate seminar course, “Hormone-Disrupting Pollutants.” Ruderman is a member of the American Academy of Arts and Sciences and the U.S. National Academy of Sciences.