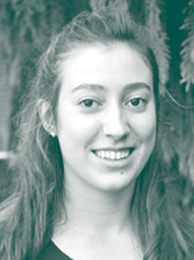 History of Earth Climate in the Sedimentary Rock Record

I investigated the series of events responsible for the last great extinction, which wiped out the dinosaurs about 66 million years ago. A large meteor impact in Mexico is the prevailing explanation for this extinction. We worked to develop a more precise timeline of these events and considered the role volcanism also may have played. We tested sedimentary rocks thought to span this time period for mercury and magnetic susceptibility. We saw some spikes in mercury levels, which may be evidence of the volcanism that occurred in India’s Deccan Traps during the end of the Cretaceous Period. Variability in magnetic susceptibility — whether an object is attracted to or repelled by a magnetic field — can be used as a proxy for the local hydrological cycle. If the local water cycle is governed by periodic wobbles in Earth’s orbit, those cycles may be used to refine the extinction timescale. Understanding the causes, consequences and timing of this climate catastrophe will ultimately help us understand — and make predictions about — human-made climate change and its impacts on civilization.